With exactly one year to go until Wonder Woman 1984 hits theaters, Patty Jenkins took to Twitter today to unveil an extremely vibrant new teaser poster for the eagerly awaited sequel that isn’t really a sequel. (Honestly, just click on the hyperlink there to understand the last part of that sentence. It’s a long and confusing fucking story.)

Anyway, have a look at the one-sheet below: 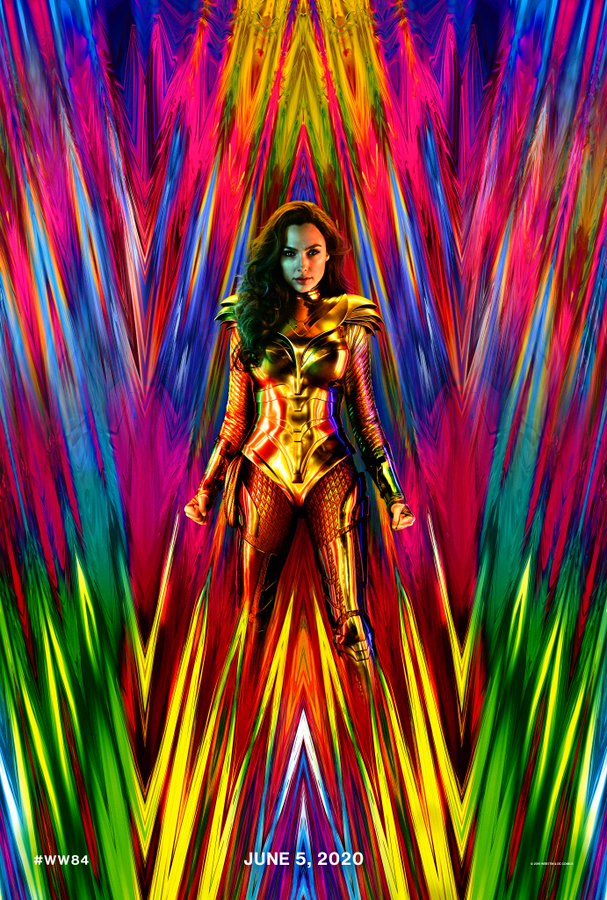 I don’t know about you, but I think that looks great! The colors that form a giant “W,” Diana’s sleek new armor, the somewhat minimalist approach to the design. Perhaps Sony’s marketing department should ask Warner Bros. who their graphic designer is.

In her tweet, Jenkins says that Warner Bros. will be sitting out San Diego Comic-Con’s Hall H this year for some unspecified reason and that they’ll be waiting until December to officially kick off the marketing campaign for Wonder Woman 1984.

That’s unfortunate news for those of you attending Comic-Con next month, but, on the bright side, at least we know when we can expect to see our first look at footage from the new Wonder Woman, which we still don’t know a whole lot about.

All we really know at this point is that Gal Gadot and Chris Pine will be reprising their respective roles as Diana Prince and Steve Trevor respectively, with Kristen Wiig and Pedro Pascal joining the cast as the film’s two main villains. Oh, and it takes place in 1984. We know that too.

Wonder Woman 1984 will fly into theaters on June 5, 2020. Let us know what you think about that vibrant new one-sheet by sounding off in the comments section below.

According to Deadline, Damon is attached to play the lead role of Denny Malone in Mangold’s adaptation of Don Winslow’s 2017 best-selling novel The Force, which is a pretty damn good read if you haven’t gotten around to it yet.

In the book, Malone — a highly decorated NYPD detective sergeant — is the dirtiest of dirty cops, having stolen millions of dollars worth of cash and narcotics in the wake of one of the biggest heroin busts in the history of New York City.

Little does Malone know, though, that the feds are hot on his tail “and he must walk the thin line between betraying his brothers and partners, the job, his family and the woman he loves, trying to survive, body and soul, while the city teeters on the brink of a racial conflagration that could destroy them all,” as the book’s official synopsis puts it.

David Mamet wrote and turned in the first draft of the script for The Force in 2017, but Mangold is currently in the middle of a rewrite with his Logan collaborator Scott Frank, so I suppose we’ll see how that turns out.

Production is officially underway on Guillermo del Toro’s star-studded new project Nightmare Alley, which features one hell of an ensemble cast that includes the likes of Bradley Cooper and Cate Blanchett in the leading roles.

An adaptation of William Lindsay Gresham’s novel of the same name, Nightmare Alley follows Stanton “Stan” Carlisle (Cooper), a young and ambitious con man who teams up with a female psychiatrist (Blanchett) for a mentalist act, only to realize that she’s even more corrupt than he is.

Rooney Mara, Toni Collette, Willem Dafoe, David Strathairn, Jim Beaver, and Mark Povinelli round out the film’s cast, with del Toro alumni such as Ron Perlman and Richard Jenkins also said to be in talks to join.

Leonardo DiCaprio was initially supposed to play Cooper’s role but was forced to bow out earlier this year as production on Nightmare Alley would’ve conflicted with that of Martin Scorsese’s Killers of the Flower Moon, which stars DiCaprio alongside Robert De Niro and is expected to begin shooting in the spring.

No word yet on when Searchlight Pictures plans on releasing Nightmare Alley, but stay tuned for more info on that.

Excited to start shooting today on our new adventure NIGHTMARE ALLEY with @RealGDT and many of our regular gang. pic.twitter.com/lzPHhXpppI

Phoenix: Warner Bros. invites you to an advance screening of Cathy Yan’s ‘Birds of Prey’

Warner Bros. will release Birds of Prey on February 7 and it’s giving Silver Screen Beat readers in Phoenix a chance to attend an advance screening of the film before it officially opens in theaters.

Our readers in Phoenix can click on this link right now to enter to free passes — good for you and one guest — to attend an advance screening of Birds of Prey happening at Harkins Arizona Mills IMAX on Wednesday, February 5 at 7:00 p.m.

Winners for this contest will be selected and notified on Monday, February 3 via email. Good luck! Below is the official trailer for Birds of Prey as well as some additional details about the film.

Rating: R for strong violence and language throughout, and some sexual and drug material

Synopsis: Birds of Prey (And the Fantabulous Emancipation of One Harley Quinn) is a twisted tale told by Harley herself, as only Harley can tell it. When Gotham’s most nefariously narcissistic villain, Roman Sionis, and his zealous right-hand, Zsasz, put a target on a young girl named Cass, the city is turned upside down looking for her. Harley, Huntress, Black Canary, and Renee Montoya’s paths collide, and the unlikely foursome have no choice but to team up to take Roman down.

Phoenix: Warner Bros. invites you to an advance screening of Cathy Yan’s ‘Birds of Prey’

Phoenix: Warner Bros. invites you to an advance screening of Michael B. Jordan’s ‘Just Mercy’

Contest: Enter to win a ‘The Grudge’ prize pack from Screen Gems and Sony Pictures