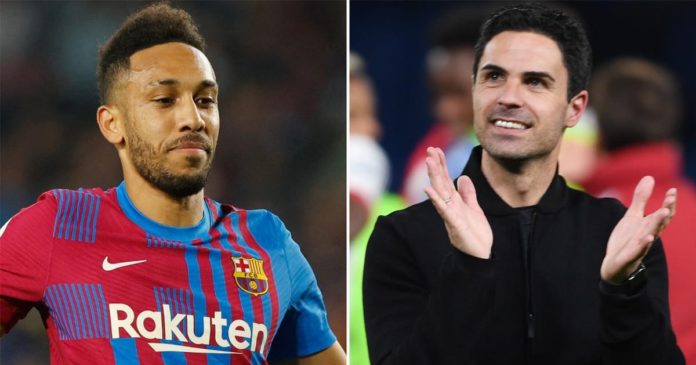 Aubameyang, who left Arsenal in February to join Barcelona, has been a success, scoring nine league goals in only 11 appearances. Arteta shouldn’t be disappointed that he was allowed to leave.

The victory elevated the Catalans to second place on the table, with 63 points. However, they are still 15 points behind Real Madrid.

That strike was the ex-Arsenal forward’s ninth goal in just 11 La Liga appearances, making him Barcelona’s second-highest league scorer behind only Memphis Depay.

Aubameyang’s last Arsenal appearance was in December. He was then allowed to join Barcelona, following a disciplinary incident. Many Arsenal fans sided with Mikel Arteta on his decision to let the 32-year-old leave at the time, however, there’s now doubt creeping in about whether that was the right call, particularly due to the Gunners’ recent issues in front of goal.

Arsene Wenger was astonished by Alexis Sanchez’s transfer genius in Arsenal.
Arsenal may make a U-turn after Elneny’s brilliant performance at Chelsea

Before Wednesday night’s impressive 4-2 win at Chelsea, Arsenal had gone three consecutive league games without scoring a single goal. Arteta confessed that he wished he had strikers in his team who could deliver more goals every week before Wednesday’s match at Chelsea.

“This is what we have! This is our reality! I wish I had 40 goals in the team. (If) I have three players in the squad in the next seven games that are going to score 21 goals…I’d go to sleep very nice and say ‘tomorrow is going to be great’.”

But while Arsenal’s issues in front of goal have been attributed to missing a ruthless goalscorer, that’s actually just one part of the problem. There are also wider issues around the team’s creativity that need to be addressed and improved by Arteta. And Aubameyang’s goalscoring exploits in Spain capture this point.

Xavi has made Barcelona more recognisable and their style and philosophy have improved steadily over the course of the campaign. And a trait of Xavi’s side, like many great Barcelona teams in the past, is creating high-quality chances on a regular basis, something that directly benefits their forwards, like Aubameyang.

The Gabon international is being presented with noticeably more shots on average at Barcelona (3.3 per 90) than he was at Arsenal (2.9 per 90), and those shots tend to be from a much closer distance to goal for the Catalans (10.6 yd) than they were for Arteta’s men too (14.2 yd).

Given that Aubameyang is taking more shots per game, and from a closer distance, it’s easy to see how has been able to pad out his scoring returns since his switch.

Arteta felt that he couldn’t keep the forward at the club because of Aubameyang’s behavior.

And while it’s tempting to think about what could have been had he stayed, the reality is he probably wouldn’t have been as efficient as he has been for Barcelona, meaning there should be no regrets. Instead, Arteta must continue to find more long-term solutions to Arsenal’s goalscoring issues.

Arsenal is warned by Xhaka before facing Tottenham for Champions League position
Lacazette might be Lacazette’s ideal Arsenal replacement after the 20-goal season.